Top 13 Most Valuable Postage Stamps in the World 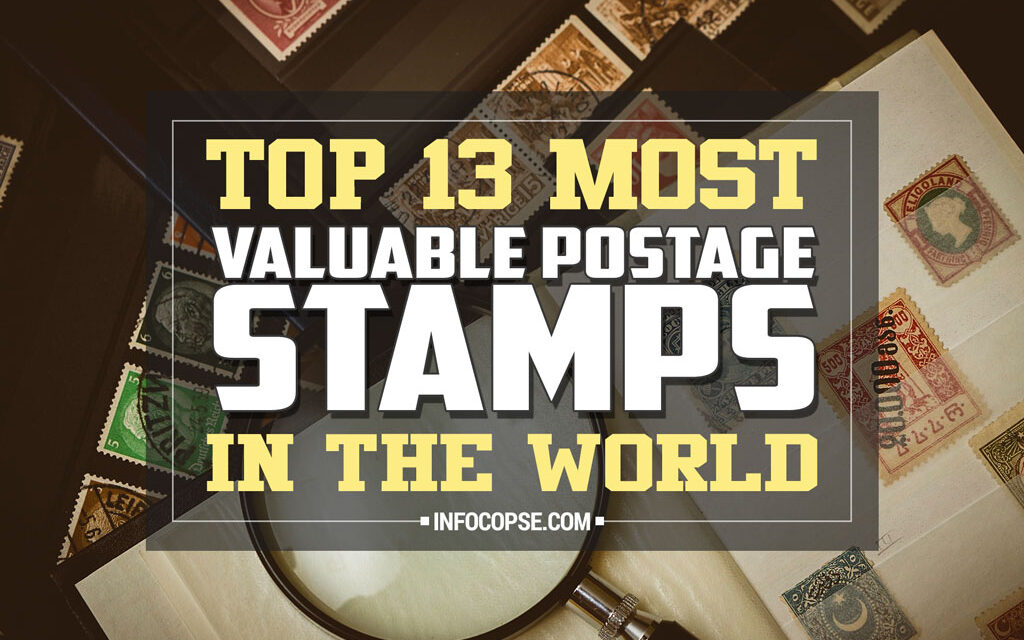 The Mauritius Post Office stamp is one of the top 100 most valuable postage stamps in the world. It was issued in September 1847. The estimated value of Post Office Mauritius on the red cover is over €8.1 million which was last sold in 2021.

The British Guiana 1c magenta is a rare postage stamp, part of a three-stamp issue that is issued in British Guiana (now Guyana) in 1856. It is considered by many to be the rarest postage stamp in the world. The stamp was first discovered by a 12-year-old Scottish boy in 1873.

Only a few examples of this Swedish stamp were ever printed, and today, they’re worth millions of dollars. The yellow stamp was supposed to be a test printing, but the printer made an error and printed some copies before he realized his mistake (the actual number of stamps printed in error is unknown).

Treskilling Yellow is the world’s most expensive postage stamp, and one of the top 100 most valuable stamps. It sold for a world record price of 2,880,000 Swiss francs (around $3.16 million) at auction in 1996.

Again, the yellow stamp was auctioned by David Feldman in Geneva, Switzerland on 22 May 2010. The sold value and the buyer were kept confidential.

What’s the most valuable postage stamp ever made? Even the most expensive stamp collector is probably not even close to the answer. If you’re willing to bet your vintage stamp collection on a number, however, we’re talking about the Penny Black. The first postage stamp was issued by the United Kingdom on 1 May 1840.

The Benjamin Franklin Z-Grill was a 1-cent postage stamp issued in the United States in February 1868. It was the first postage stamp to show the portrait of Benjamin Franklin. It was also authorized by the Postal Department to be issued at the rate of 2-cent, 3-cent, 5-cent, 12-cent, and 15-cent. It is considered to be the most famous of all United States postage stamps and, in philately, it is called “the King of American stamps”. Only two stamps existed, this stamp is worth 3,000,000 US dollars.

This is the second issue of The Whole Country is Red postage stamp. The stamp commemorates the Cultural Revolution was created by the Chinese Postal Service on 24 November 1968.

On 23 November 2018, the Chinese postal stamp was sold for 13.8 million yuan (US$2 million) at the China Guardian auction in Beijing.

The Inverted Jenny is a postage stamp printed in the 1918 series of definitive airmail stamps and is the most famous rarity in philately. Only one pane of 100 stamps has ever existed in this condition, and today it is worth more than $1,593,000.

The stamp was made by the US Bureau of Engraving and Printing. The error was caused by a broken die, which resulted in the bottom left corner of the design being inverted (upside-down and back to front). Consequently, in addition to its rarity, this stamp is one of the most famous rarities in philately, and it is the only inverted stamp ever produced by the US government.

One of the top 50 most valuable stamps in the world, Inverted Jenny was designed by Clair Aubrey Huston resident of Washington DC. He was the chief postage stamp designer at the US Bureau of Engraving and Printing. The stamp was meant to commemorate the first-ever airmail flight between Washington and New York.

While all the 19th-century stamps of the United States were engraved by Marcus Baldwin, the production of the inverted Jenny required several innovations, including the intentional cutting of the printing plate, and the first use of the pantograph in the production of postage stamps.

A postage stamp with a mistake in it, a Baden 9 Kreuzer Error stamp, is a postage stamp error selling for a huge price. This postage stamp was printed in Baden, a historical state in Germany. It was issued in 1851. The stamp was supposed to have 9 kreuzer on it which was the face value.

However, four copies of the stamp were printed with error. The first three were canceled and the last one was an unused copy of this error. That made it a rare stamp. This stamp is also called the “Stamp of Baden”.

The Red Revenue three-cent stamp is a postage stamp issued by the Chinese Qing dynasty in 1897. It is considered the most famous of all postage stamps because of its rarity and the great amount paid for a single stamp, over 7.22 million yuan, sold in the 2013 Beijing auction. It is one of the rarest and most valuable postage stamps in the world.

Red Revenue “Small One Dollar” stamps are some of the most valuable stamps in the world which only 32 are known to remain.

The Tiflis stamp was one of the first postage stamps of the Russian Empire, which was formed on 20 June 1857. Its name is derived from the city of Tiflis (now Tbilisi), the capital and largest city of Georgia.

The Tiflis postage stamp was issued by the Russian Post Office. It was first issued in the Caucasus region and was mainly used for sending mail from the North Caucasus to the rest of the Russian Empire. It is considered one of the world’s most beautiful stamps.

The Canada 12d black postage stamp is considered by many people to be the most beautiful of all Canadian postage stamps. It is also known as The Black Empress of Canada. It was introduced on 14 June 1851 and soon became the most popular stamp in Canada which was printed in New York. The Queen of England, at that time, was Queen Victoria. She appeared on most of the British Empire’s stamps. However, the 12d black stamp was the first one to be issued in Canada, and it was the only one to be issued with her portrait. The estimated value of Twelve Pence was up to $425,500 as of 2011.