List of the Top 10 Scariest Gas Masks in the World 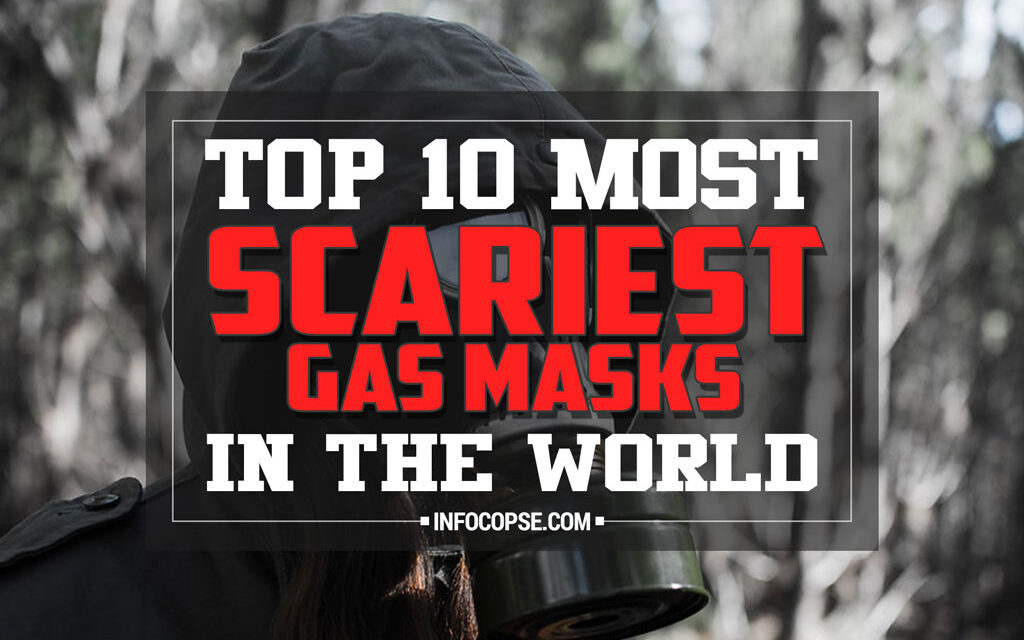 While wearing a gas mask may be a terrifying experience, it can also be a great tool for survival. Gas masks are likely to be around for a long time and are a major theme of many horror films. They’ve been featured in countless movies, TV shows, and other media, but that doesn’t mean we should ignore this type of gear.

The gas mask is a flexible piece of gear that allows us to defend ourselves against toxic substances, and we should always be prepared. Gas masks also can protect the wearer from other health hazards, such as gas leaks or even nuclear attacks. Here’s a list of some of the top 10 scariest gas masks to ever exist.

There has always been something incredibly frightening about gas masks. They hide the users’ apparent distort their voice and make them look very off-putting. So, we have compiled a list of the top 10 scariest gas masks.

These masks have been worn by a special force of the U.S. Military. The masks are a proven design, over 60 years old. They can be found in collections, museums, and sold on the Internet. The US Military gas mask is an example of a gas mask that is built to provide a safeguard from all types of biological and chemical agents.

M17 Gas Mask is a replacement for the M-9 gas mask that was manufactured in 1959 for the Vietnam war to standard use for the U.S. Military.

Soviet ShMS Gas Mask was a mass that resembles a skull in Russia. This is known as the Monkey Mask because some people think it bears a resemblance to chimps and other primates. However, to me, this mask will always look like a sculpt. This mask and other masks like it were made by de Soviets. Played a huge influence in the development of half-life 2 behind.

This famous civil protection gas mask as you can see this mask has nothing friendly about it. It literally looks like its skull or a death’s-head mask it was issued to snipers and other soldiers. That needed to use optics. The flat design of the face means that scopes and binoculars can be placed against the mask.

However, it certainly has a skull-like appearance for intimidation value and finally.

It is another children’s mask this time. It is Soviet Child Gas Mask PDF-D, like the gp5 that was issued to civilians. This was a children’s version. However, many examples of this mask are made in black and other drug colors which certainly didn’t help make the mask look any friendlier to children.

You can find some creepy pictures online of little children wearing this mask. We’re a bit drooping off of their faces with elephant-like hoses at the front. Many famous photos are showing this mask laying discarded on the floors of Pripyat in the Chernobyl exclusion zone. This is a master that is synonymous with a disaster mask.

British Mickey Mouse gas mask during World War Two. Britain wanted children to wear gas masks. So, they decided if they made the mask bright colors such as red and blue, it’d be more friendly for children to wear it.

They also named the mouse Mickey mask in the hopes. It would make children want to wear it such as a cartoon character Mickey Mouse. Although this mask bears no resemblance to Mickey Mouse. It is rather creepy looking especially when you see pictures of little children wearing it.

Another variation of this mask was made in black and blue which doesn’t help at all to make the mask look any more child-friendly.

It looks like the corpse of Mickey Mouse’s face. Imagine hundreds of children wearing this mask. All with the face of Mickey Mouse plastered over theirs, except the colors are off everything looks wrong about this mask.

Walt Disney designed it with the American government want to issue it to children to make them enjoy looking like Mickey Mouse. However, as you can see this mask is absolutely horrifying and that’s why I think it deserves one of the top 10 scary gas masks.

Everything about this mask is frightening. It has the off-putting color, the uncanny valley effect from a famous character that doesn’t look quite right. And let it be worn by little children running around and singing nursery rhymes.

Soviet MM1 gas mask which stands for mask membrane number one this was issued to tank crews. Masks were designed so the tank user could look through the mask easily to see tank optics and speak for the voice diaphragm to the other tank crewmen.

However, this mask bears a very creepy resemblance to a skull or some sort of starved face with the voice diaphragm and the eye is looking like bony. Structures sticking out at the front of the mask. The mask was normally used with a hose and a hammer sack containing a large coffee can style filter.

Swedish Folk mask from the 1950s. This is very similar in many ways to many of the World War Two civilian masks. It’s a very simple cheap rubber mask, were very interesting convex disc type eyepieces. It was meant to be cheap to produce this mask with me strikes a very good example of a creepy industrial style design.

Thankfully these masks are never needed as a cold or never went hot.

Volks Mask 40 or VM forty in English as would be the people’s gas mask. Number forty and the Volks mask 38 were issued to many civilians in Nazi Germany. The mask has a very weird appearance. It’s green with a large form nose valve and a very large metal cylinder type filter that sits on the bottom of the mask.

The whole appearance of this mask is odd and with many examples of this mask as time has gone on the eyepieces of discolored becoming eerie shades of red or orange. Many other nations in World War II also issued very creepy-looking civilian respirators.

The British civilian respirators are very famous examples and were the influence behind a very scary episode of Doctor who known as the empty child mask.

Which was an experimental respirator, designed by the US Army to be used in riot control situations and would be a platform that is used in the development of layer masks. Such as the M17 rather than having big external filter canisters.

It has slim filters that sit inside the cheeks. However, the bug-eyed look of these masks and their shape reminds many people of the locust. There was the official nickname for this mask known as the Grasshopper. It has a very insectoid look and is a very weird thing to look at cheek filter masks. Like these would eventually fall out of favor and many nations would return to using normal canister filter-type masks.

However, the examples of cheek filter MRSA that exist are certainly, slightly unnerving and have a very weird appearance to them.

From the Soviet Union, the mask is the world’s most-produced mask with over a hundred million of these things made. It’s a simple white or black latex hood stretched over the wearer’s head with two eyepieces crimped on and a simple intake outtake valve for the filter.

This is a very famous mask for use in films and games and it’s very creepy looking, because of the sort of eerie hood-like appearance. This mask was famously used in the half-life 1 mod paranoia were a zombie.

Russian soldiers were seen to be wearing it, although this mask is very common. It’s very eerie and has a very distinctive profile mask.

The PH gas hood from World War I. During the first world war before the commonly known modern gas mask was invented soldiers wore flannels soaked in chemicals to prevent them from inhaling toxic gases. These were very simple masks, essentially just cloth soaked in or impregnated in chemicals that would disable the active gases.

However, the subject is very off-putting creepy about a soaked flannel with eye holes and a mouth flap covering the wearer’s face it hides their identity and seems almost scarecrow-like in the gas-choked battlefields of World War 1.

The wearer of this mask would look almost like a ghost moving through the trenches.

I hope you have enjoyed my list of scary gas masks. Although this is my personal top 10, there were lots of masks I wanted to put on this list. But I think the ones I ended up putting on but a creepiest of a lot.

Obviously, your personal preferences may vary on this as there are some really horrifying designs out there. In general, I’d say Soviet masks consistently have creepy designs and I often think they made them look scary on purpose to have a psychological effect on the battlefield. I don’t know everything there is to know about these masks, but I think I have a fairly good knowledge of them. Please let me know in the comments what your scary masks are.