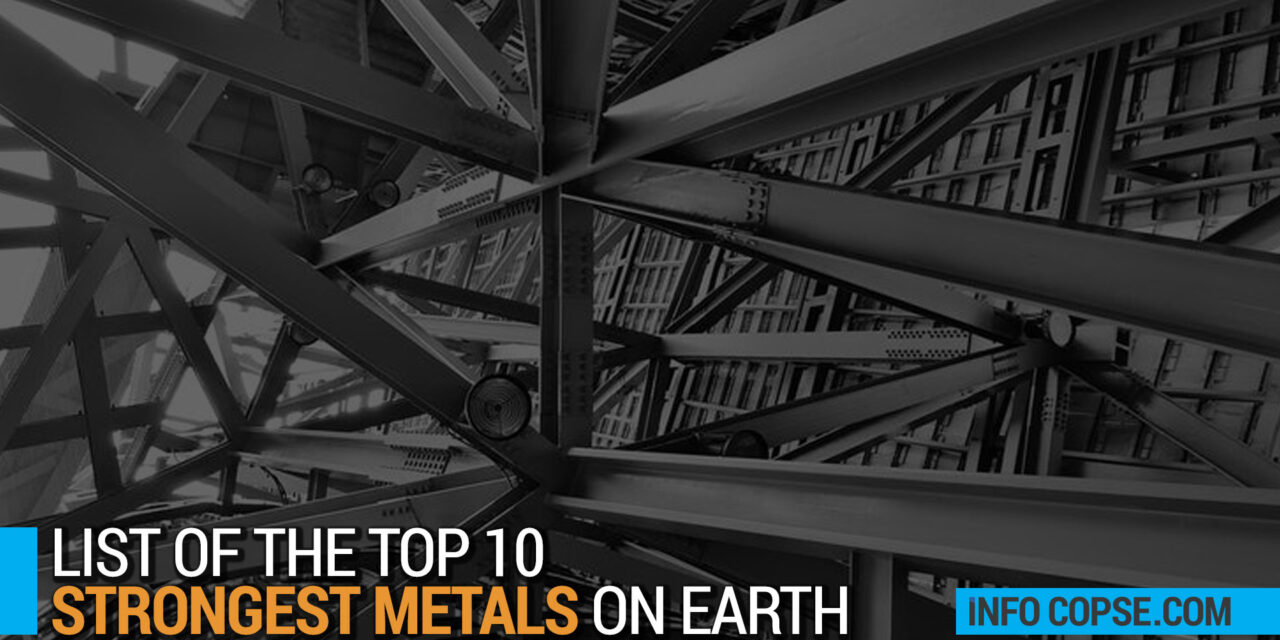 There are many different types of metals, with the strongest being categorized as those that are able to withstand extremely high temperatures without melting. As a result, the strongest metal on Earth is probably the metal Tungsten, although it is not the easiest metal to get on Earth.

In this article, we have added a list of the top 10 strongest metals on earth.

Metals are one of the three broad categories of elements; the other two are nonmetals and metalloids. In chemistry, a metal is often defined by its melting and boiling points.

Metals are elements that are solid at room temperature and have high melting points. They’re often malleable, ductile, and conduct heat and electricity well. They’re usually shiny and can be polished to a bright shine.

Here is a periodic table to show the relationship between metals, metalloids, and nonmetals. It is separated by colors.

What Makes a Metal Strong?

Strong metals are characterized by their ability to withstand high pressure, high temperatures, and conduct electricity. A strong metal does not have to be extremely heavy. Actually strength of a metal depends on some properties, like Tensile Strength, Compressive Strength, Yield Strength, and Impact Strength.

Tungsten is a chemical element with the symbol W and atomic number 74. The name tungsten comes from the Swedish language “tungsten”, literally “heavy stone”. It is one of the top 10 hardest metals on earth.

Tungsten is a metal with high tensile strength and high density, which is very heavy. It is used in the manufacturing of military equipment and industrial equipment, aircraft, and motorsport ballast weights, sporting equipment, and is a very strong metal.

Steel is exceptionally strong and can be formed into anything from a car chassis to skyscrapers to even airplanes. Its most common form is steel, however, which is a mixture of iron and carbon with added trace elements that help harden the metal.

It is one of the top ten strongest metals on earth and is valued for its ability to be forged, molded, and cast.

Steel is used to create tools and structures, such as buildings, infrastructure, trains, ships, machines, and weapons.

Chromium is the first element in group 6, the symbol is Cr and the atomic number is 24. It is a steely-grey, hard, lustrous, and malleable transition metal. Chromium was discovered in 1794 by French pharmacist and chemist Louis Vauquelin.

The Chromium is a metal that is used for making chrome plating and metal alloys. It is also used in stainless steel and has a high melting point.

The metal Titanium is used in applications where a high strength to weight ratio is needed. For instance, since it is lightweight and still strong, it is used in building aircraft, 6061-T6 Aluminium alloy. As an additive, Titanium is used to strengthen plastics.

Titanium is the strongest metal in the world, stronger than steel and other metals, but it’s also very expensive to make.

Iron is one of the four essential elements of life. It is found in every living thing. The common form of iron is iron oxide, which is the chemical compound used to make rust. Iron oxide is a colorless, odorless, and tasteless compound. It is highly reactive and even a small amount of iron oxide will react with water or other substances. Iron oxide is the most common form of iron.

Iron is a chemical element with important properties and applications. It is the most common element with the symbol Fe, its atomic number is 26, and Group 8 is in the periodic table.

Iron is considered the strongest element in the periodic table, which means it is an essential part of our everyday lives. It is found in almost every human and animal body. It helps in the transportation of oxygen and the formation of energy in the body. It is also used in medicine to treat anemia and menstruation problems. Iron is of great importance because of its health benefits.

Vanadium is a chemical element that is a silver-gray, malleable transition metal, that has the symbol V and the atomic number is 23 in the periodic table. It is found in the earth’s crust in small amounts of ore deposits and is used as a catalyst in the production of some green energy sources.

Vanadium is classified as a rare element. The United States Geological Survey has estimated that the world’s vanadium ore deposits contain more than half the known global vanadium resource, with most of the remainder located in South Africa. That is why it is more rare than gold.

The notable characteristics of vanadium are its high atomic weight and high melting point. Vanadium has the second-highest boiling point of all the metals.

Lutetium is one of two rare earth elements that are named after the French scientist Georges Urbain, and Lutetium was independently discovered by him in 1907. Lu is its symbol and atomic number is 71 in the periodic table.

Lutetium is an element that’s used in phone and computers memory and is radioactive. It is so incredibly rare that it only occurs naturally. The element is so rare and valuable that it’s not used very often.

Zirconium is a metal with a chemical symbol of Zr and the atomic number of 40. That occurs in nature in Australia and South Africa. At room temperature, it is the softest known metal, although it can also be found as a diamond substitute. Zirconium is a shiny silvery-white metal that tarnishes in the air and is only slightly genotoxic.

It can be found in the environment as ores and is used in alloys for the production of everything from dental alloys to nuclear fuel rods. Dihydrogen Hexafluorozirconate is used in paints, and it is also used in dental implants and jewelry.

Osmium is more resistant than platinum and more expensive than gold. It is a dense, silvery, blue cast transition metal in group 8 of the periodic table.

Tantalum is a metal with a chemical symbol of Ta and the atomic number of 73. It is a soft and ductile, gray-blue transition metal and is one of the six rare-earth elements. Tantalum is found in the US, Brazil, Finland, and Central Africa.

What metal is stronger than titanium?

Which is the strongest metal in the world?

What metal is bulletproof?

Tungsten metal is bulletproof. Tungsten is the naturally occurring metal that is 100% dense and therefore is the strongest and heaviest metal on Earth. It is also the hardest metal to work with, as it is very brittle past its melting point.

Can tungsten stop a bullet?

Yes, Tungsten can stop a bullet. Tungsten is a metal that is stronger than most others. It is harder, denser, and more scratch-resistant than steel. It is also one of the most corrosion-resistant metals.

What is the strongest metal against bullets?

Can aluminum stop a bullet?

Yes, aluminum can indeed stop a bullet, but only if the bullet is from small-caliber weapons and moving very slowly. If a bullet is moving faster, aluminum will deform, and may not stop the bullet. It also depends on how thick it is.